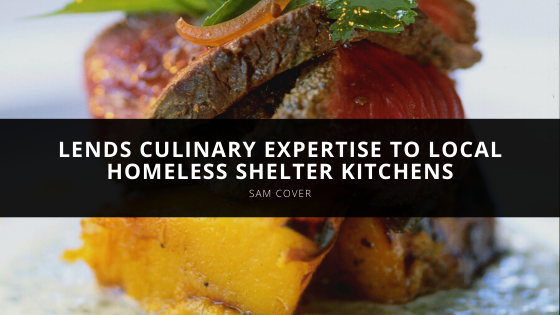 Award-winning chef Sam Cover lends a hand in the kitchens of a number of Spokane County’s homeless shelters.

Recognized for his charitable nature by friends, family, and fellow chefs and others from the worlds of restaurant dining and luxury catering, Sam Cover is no stranger to donating both time and funds to good causes and those in need. Cover’s latest charitable effort has now seen the chef lend his culinary expertise to local homeless shelter kitchens in and around Spokane County, as well as further afield. Known, in particular, for his fresh fish and seafood dishes, the Pacific Northwest native explains more.

“I’ve always been a keen supporter of the local homeless shelters here in Spokane County and across the wider Pacific Northwest,” says chef Sam Cover, speaking from his home in the eastern Washington state city of Spokane.

While Cover has previously donated funds, food, and other supplies to shelters in the region, he’s kicked off this year by lending his culinary expertise, too. “I’ve donated my time in the past to help sort through donations, for example, and to help raise funds,” he explains, “but I always felt like there was more I could do.”

Now lending his professional knowledge to a number of local homeless shelter kitchens in and around Spokane County, Cover says he’s never been happier. “I’ve been able to help plan healthier, more cost-effective dishes and menus,” reveals the chef, “with a particular focus on locally-sourced produce – which, of course, is also great for the environment.”

The award-winning chef has also turned to his contacts in the produce sector in and around Spokane County to source additional donations of fresh fruit, vegetables, meat, fish, and other ingredients. “It’s been a great experience so far,” adds Cover, wrapping up, “and I look forward to continuing to work with other local homeless shelters and those further afield throughout the rest of the year.”

Growing up in Spokane County, much of what chef Sam Cover creates has roots firmly in the classic food and drink of the Pacific Northwest corner of the United States. Cover is known, in particular, for his fresh fish and seafood dishes. An advocate for the popular farm-to-table movement, Sam Cover relishes in gastronomy and embracing the latest culinary trends, including sourcing only hyper-local ingredients, and utilizing alternative proteins and marine vegetables. To date, Sam Cover has enjoyed more than two decades of fast-paced life as a chef, winning multiple awards for his food in the process. Cover is further known for perfectly combining elegant plating and local produce to create what he calls a professionally executed taste of home.