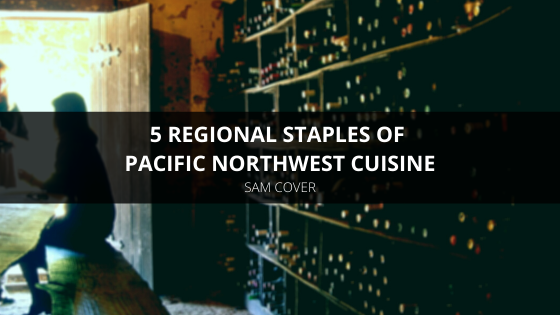 West coast chef Sam Cover in Spokane Washington has mastered a variety of cuisines in kitchens across the country, and below he names five regional staples of the Pacific Northwest that ignited his passion for food.

A native to Spokane, Washington, renowned chef Sam Coverhas carved out an impressive reputation in the Pacific Northwest’s thriving restaurant and luxury catering scene. Having worked in numerous kitchens in Spokane County and across the country, even in major hubs like Los Angeles and New York City, Sam Cover has managed teams in some of the nation’s most highly-regarded restaurants and hotels. Below, he names five staples of Pacific Northwest cuisine that have shaped his love of food.

Walla Walla onions are the official Washington state vegetable, and they can be found in dishes in restaurants in every state of the Pacific Northwest. Sam Cover of Spokane Washington tells us, however, that one of the most popular ways to eat the delectable onion is in onion rings––usually served up in a crispy buttermilk batter.

Hot dogs have many famous “recipes” like the Chicago style or the Coney Island special. In this region, though, Seattle dogs are the most popular way of dressing up hot dogs. Seattle dogs are slathered with cream cheese and topped with grilled onions (likely Walla Walla onions) and are best enjoyed at sports games and backyard barbecues.

The marionberry is beloved in the Pacific Northwest and for good reason: the berry is a hybrid between two different types of highly-popular blackberries, the ‘Chehalem’ and the ‘Olallie.’ The berry was developed by the USDA ARS breeding program years ago and has remained a staple food of the region ever since.

“Marionberries are used in countless ways by the area’s restaurants and home cooks, but jams and pies seem to be everyone’s favorites,” says Sam Cover in Spokane Washington.

If you’ve eaten hazelnuts in America, chances are they came from the Pacific Northwest. Oregon alone grows 98 percent of the country’s hazelnuts, which are incorporated into a range of beloved desserts, most notably chocolate dipped hazelnuts.

Perhaps the most prized food on this list, salmon is a major export in the Pacific Northwest as the fish are native to the area’s rivers and oceans. People of the region aren’t at a loss of ideas of how to eat it, either: here, you’ll find salmon burgers, salmon jerky (or ‘candied’ salmon), fish spread featuring salmon, hot and cold smoked salmon, grilled salmon and many other quintessential recipes.

“We have a diverse set of native flavors that every kid here in the Pacific Northwest grows up eating,” saysSam Cover of Spokane Washington. “These are just a handful of the local staples that had the largest impact on my own passion for food.”