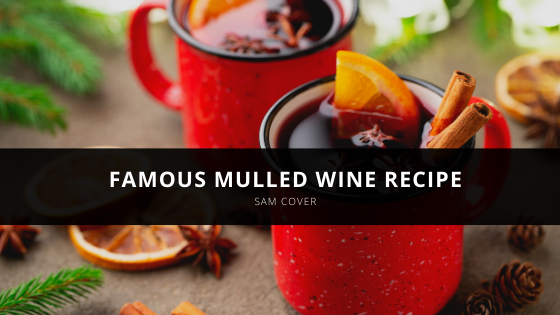 With winter getting into its stride and the festive season just around the corner, Sam Cover, an award-winning chef from the Pacific Northwest, shares his favorite seasonal mulled wine recipe featuring an array of fresh fruit, liquor, unusual spices, maple syrup, and more.

“There’s nothing better during the holidays and throughout the cold winter months than delicious mulled wine,” suggests Cover, an award-winning chef and restaurateur from Spokane, Washington.

Cover’s favorite recipe is now famed among not only his friends and family, but also among those lucky enough to have tasted the chef’s famous mulled wine when visiting the numerous establishments with which he’s been associated across the United States following more than two decades as an award-winning chef.

“My famous mulled wine recipe calls for wine, of course, plus liquor, fresh fruit, spices, and maple syrup,” explains Cover, happily sharing details of what, for many years, had been something of a secret, according to the chef. “Start with a medium-bodied red wine,” he says, “and add a little brandy to taste.”

A classic addition to most mulled wines, Sam Cover’s recipe is no exception and next calls for orange slices. “If you prefer, you could add clementines, or even lemons, although orange has always been my preference,” adds the culinary expert.

What really makes the award-winning chef’s mulled wine special, however, he says, is the addition of further fruit plus a unique mix of spices and added sweetener. “I also add cranberries and blackberries,” reveals Cover, “which provides an extra dimension not seen in more typical mulled wine recipes.”

“The real secret, though, is in the spices,” Cover continues. “Cinnamon sticks are, of course, a staple,” he goes on, “but I also like to add an ample quantity of cloves, star anise, and a small number of black peppercorns for some extra punch.”

These spices, after all ingredients have been warmed over a low heat for up to an hour, the chef points out, should be strained from the wine before serving, although a cinnamon stick or two can be left in each glass, he says, for visual effect.

“Finally, I sweeten to taste,” Cover explains. “I prefer maple syrup, but honey or brown sugar works well, too,” he adds, wrapping up, “and can be added a little at a time until the desired sweetness is achieved – perfect!”